There is a long standing discussion on how best to calculate the lower and upper confidence bounds on the Mean Time Between Failure (MTBF) for a time-truncated test (Type I Censoring) assuming that the times between failure are exponentially distributed (constant failure rate).  This Reliability Que discusses the use of the Chi-Square distribution for confidence bound calculations and the implications resulting from the use of different methods for assigning the required degrees of freedom to the distribution.

As time-truncated testing is a common test procedure, an understanding of the advantages and limitations of the current approaches is useful in predicting expected fielded system performance.  As this discussion pertains to confidence bounds around the mean of the exponential distribution, the sample mean is:

Where:
Xi = individual times for each observation of the sample size “N”
N  = number of statistically independent sample observations

Case 1:  In an attempt to put the discussion into perspective, Rolf Sundberg produced a paper titled, “Comparison of Confidence Procedures for Type I Censored Exponential Lifetimes” (Stockholm University, Sweden, 2000) which summarizes seven methods for constructing confidence bounds for time-truncated tests.  One of these methods, proposed by Nelson (1982), and advocated also by Cox & Oakes (1984, Sec. 3.4), uses 2n degrees of freedom (n = number of failures) in the Chi-square distribution to calculate both the lower and upper confidence bounds on the MTBF.  The equations for calculating the upper and lower bounds for both the one-sided and two-sided cases are:

This approach is identical to the failure-truncated test case.  There are two major issues with this approach.  The first is that the 2n assumption basically ignores any test time beyond the last failure from the perspective of confidence bound calculation.  The second problem arises in the special case when no failures occur during the course of the test.  The 2n degrees of freedom assumption in the Chi-square distribution does not allow for the calculation of any valid confidence bounds in this very realistic zero failure testing scenario.

Case 2:  A slight modification to this “2n” approach has been advocated in the Department of Defense (DoD).  In this approach, MIL-HDBK-338, MIL-HDBK-781 and MIL-HDBK-189 all use “2(n+1)” (i.e., “2n+2”) to calculate the degrees of freedom for the lower MTBF confidence bound and, like the previous approach, use 2n for the upper MTBF confidence bound.  The equations for calculating the upper and lower bounds for both the one-sided and two-sided cases are:

This modification does allow for the calculation of a lower confidence bound on the MTBF in the zero failure case (which is important for DoD purposes), but still does not allow for a realistic upper bound calculation.

Case 3:  Another method, proposed by Cox (1953) and taken up by Lawless (1982), uses “2n+1” for both the lower and upper confidence bounds.  This method essentially assumes progression “half-way” to the next failure at the time of test truncation.  It also allows confidence intervals to be constructed for the zero failure case.  The equations for calculating the upper and lower bounds for both the one-sided and two-sided cases are:

Case 4:  In yet another approach, Dr. Jorge Luis Romeu, in Selected Topics in Assurance Related Technologies (START) Volume 10, Number 7, “Reliability Estimations for the Exponential Life”, advocates the use of “2n+2” to calculate the degrees of freedom for both the lower and upper MTBF confidence bounds.  The equations for calculating the upper and lower bounds for both the one-sided and two-sided cases are:

This is essentially equivalent to assuming that the next failure is “imminent”.  It also permits confidence bounds to be constructed in the zero failure case.  This approach is the one incorporated into Quanterion’s System Reliability Toolkit-V and the Quanterion Automated Reliability Toolkit – Enhancing Reliability (QuART-ER) software. 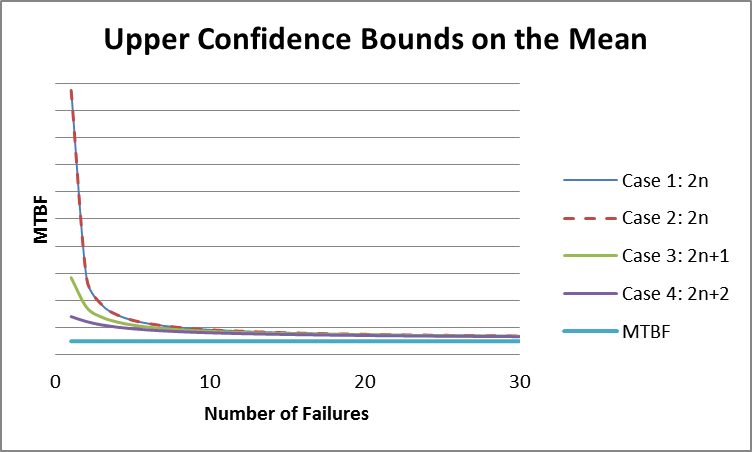 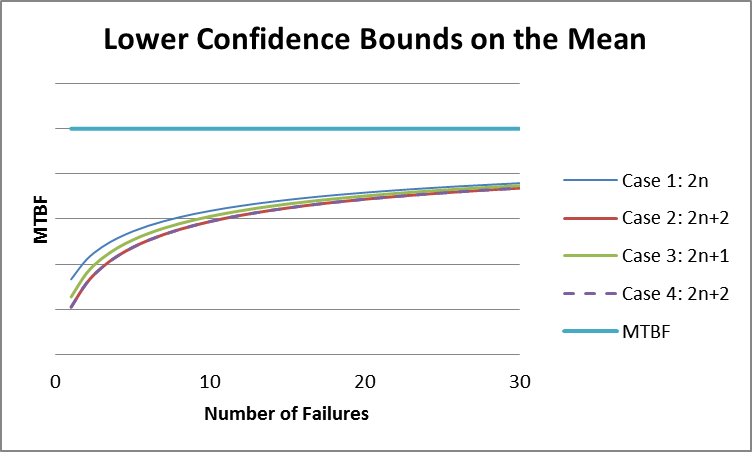 Figure 3 shows the calculated results for a time truncated test with 90% confidence bounds (degrees of freedom = 2n + 2) and a total test time 0f 1000 hours with zero failures.  Note that as the failure distribution in this case is assumed to be exponential, the actual number of units on test is not necessary for calculation purposes, only the total test time. 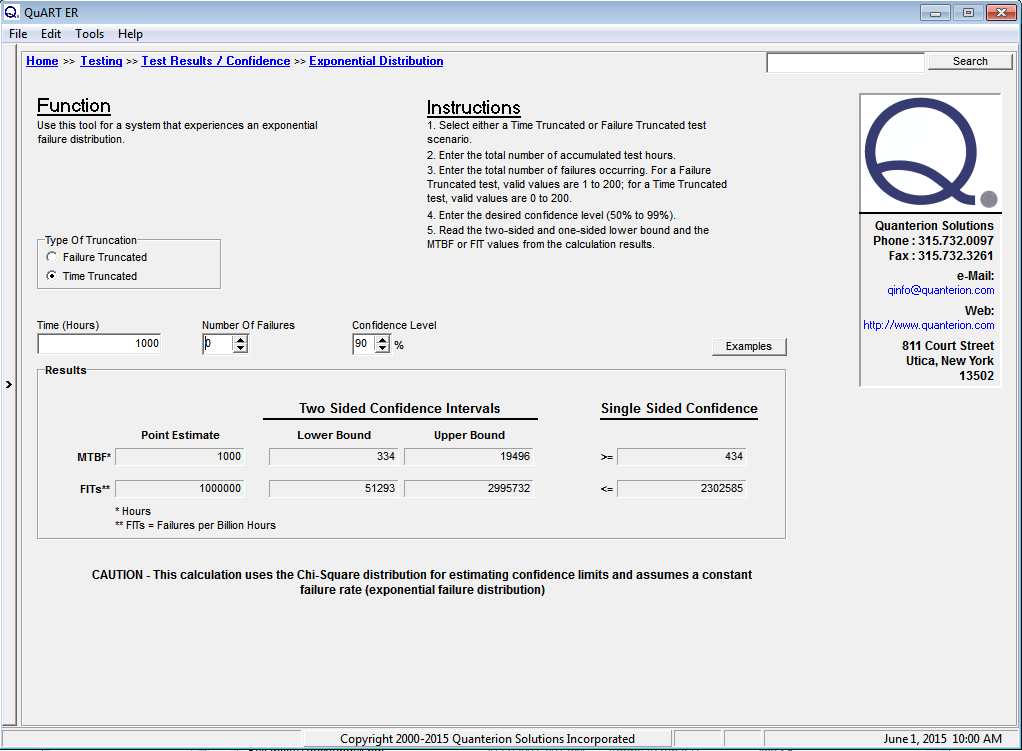 As can be seen from the figure, QuART-ER performs a number of different calculations with the input data.  The first calculation is for the system’s MTBF point estimate.  In the zero failure case, the assumption that a failure of the system is imminent (n = 1) results in a MTBF = 1000 hours.  Note that the calculated MTBF point estimate for the single-failure case shown in Figure 4 is also 1000 hours.  In this case, “n” actually does equal 1.  In contrast, the lower and upper confidence bound are calculated based on the actual number of failures the system has experienced (zero failure case, n = 0 and single failure case, n = 1).  An analysis of the figures clearly shows that upper confidence bounds are indeed calculated in both cases and the resulting magnitudes show the substantial difference between the two scenarios. 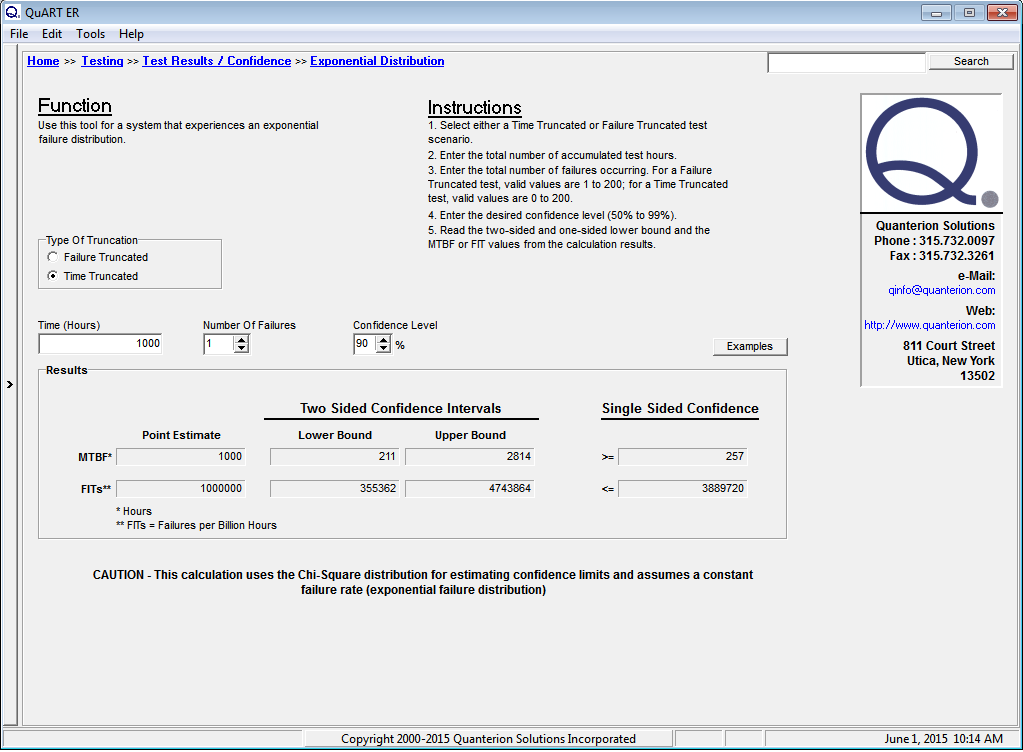 As mentioned previously, the DoD has adopted the 2n degrees of freedom method for the upper bound confidence interval which cannot be calculated for the zero failure case.  One reason for this is that the DoD uses this type of testing to predict future fielded system performance and the lower bound is all that matters from a reliability prediction perspective.  This is not to say that the upper bound prediction has no value in the overall decision-making process.