Reliability growth is the intentional positive improvement that is made in the reliability of a product or system as defects are detected, analyzed for root cause, and removed. The process of defect removal can be ad hoc, as they are discovered during design and development, a function of an informal test-analyze-and-fix process (TAAF), or it can be as a result of formal Reliability Growth Testing (RGT). Reliability Growth Testing is performed to evaluate current reliability, identify and eliminate hardware defects and software faults, and forecast future product or system reliability. Reliability metrics are compared to planned, intermediate goals to assess progress. Depending on the achieved progress (or lack thereof), resources can be allocated (or re-allocated) to meet those goals in a timely and cost-effective manner.

where “T” is the test time, “T0” is the time at the beginning of the monitoring period (initial time interval), “MTBFC” is the cumulative MTBF at time “T”, “MTBFI” is the instantaneous MTBF at time “T”, and “α” is the growth rate.

The Duane model is often used to plan a reliability growth test. For example, consider the data provided in Table 1 for a proposed RGT for a Signal Processing Computer.

The test time necessary to grow the reliability from 500 to 2,000 hours can be calculated by substituting the values provided in Table 1 into the Duane model equations above and solving for “T”. In this example, the total required test time is 15,333 hours. If 4 test articles are used, then the total test time per article is 3,833 hours. The “Duane Method” calculator in the Quanterion Automated Reliability Toolkit – Enhanced Reliability (QuART-ER) (Figure 1) and QuART-PRO can be used to perform the calculations. If the required test time is prohibitive, then a more aggressive approach to precipitating and correcting failures should be considered, which could justify a higher growth rate. 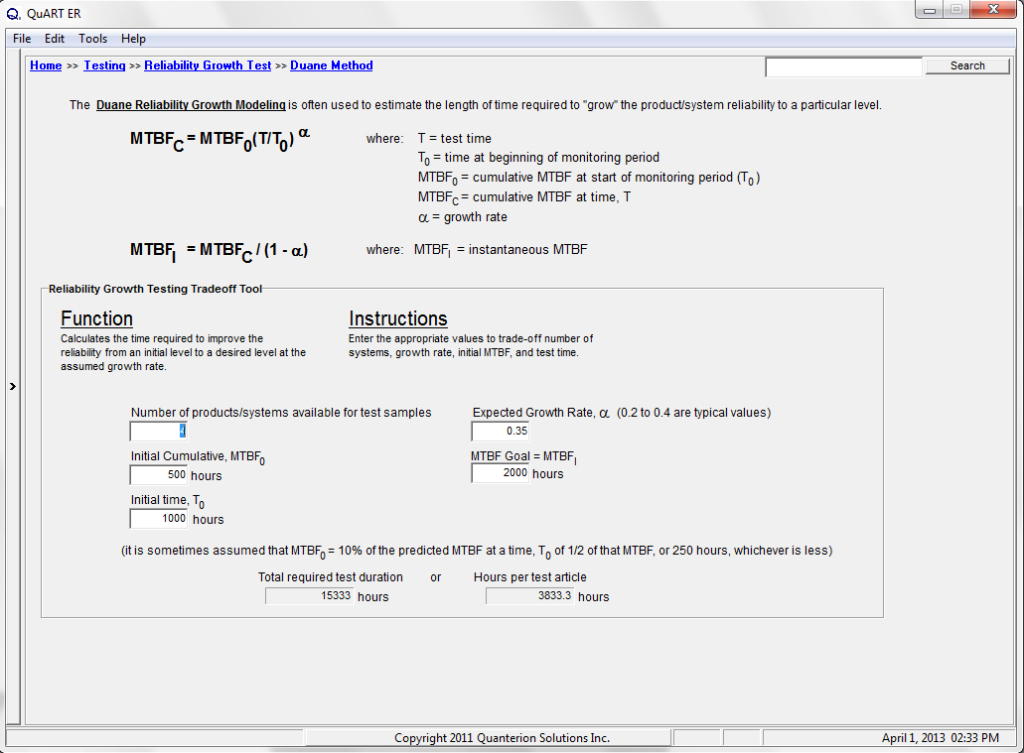 For example, consider the sample RGT data for the Signal Processing Computer shown in Table 2.

*Indicates failure occurrence Calculating the AMSAA-Crow parameters at the end of the test (T = 2,000 hours), we have (where “F” is the total number of failures and “Xi” is the cumulative failure time of the “ith” failure):

From these calculations, it can be concluded that reliability growth is occurring (“β < 1”), and that the instantaneous MTBF at the end of the test is approximately 209 hours.

These calculations can also be performed using the QuART-ER AMSAA-Crow calculator as shown in Figure 2. QuART-ER also allows for a confidence interval to be constructed around the MTBF data, and it performs a goodness-of-fit test. As shown in Figure 2, the 80% confidence interval on the instantaneous MTBF is (126.16 hours, 385.58 hours) and the goodness-of-fit test indicates that the AMSAA-Crow model describes the failure data. (Note, the AMSAA-Crow calculator is not included in QuART-PRO.) 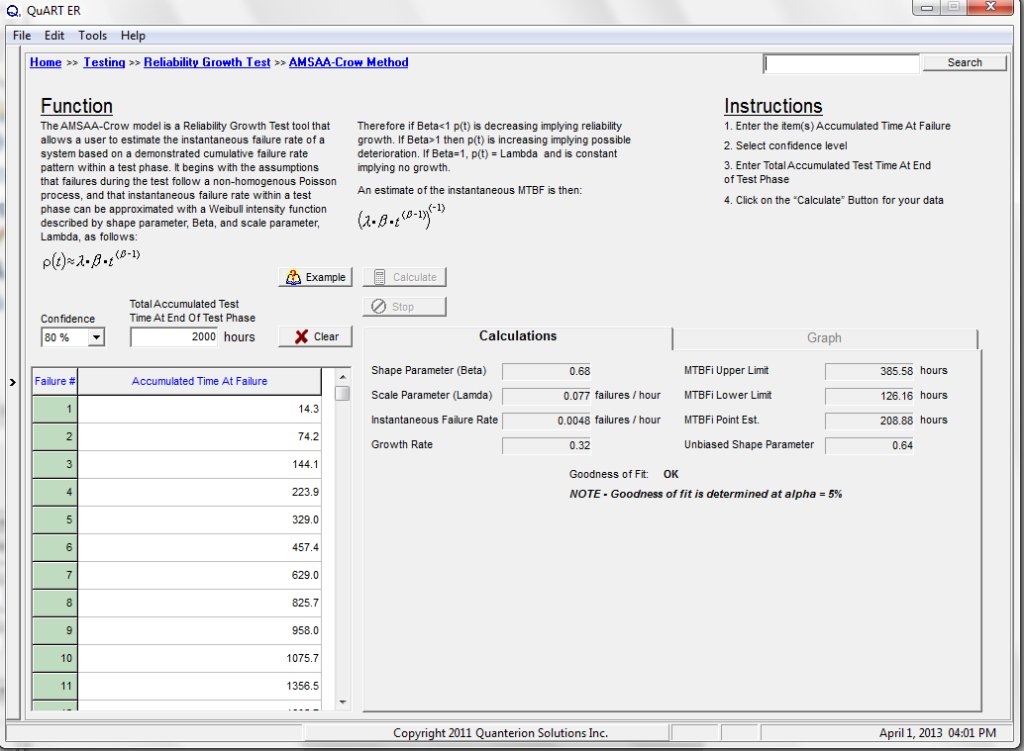 As an example, the failure data presented in the previous example will now be categorized into specific failure modes and types as shown in Table 3.

As we can see, there are 7 unique failure modes including 1 A-mode, 3 BC modes and 3 BD modes. The first occurrence times of each of these modes are shown in Table 4.

Quanterion’s QuART-ER Crow Extended Model calculator can be used to calculate the projected MTBF at a given point in time. (The Crow Extended Model calculator is not included in QuART-PRO.) This process involves three steps. First, the seven unique failure modes are entered into Table 1 of the calculator as shown in Figure 3. The first occurrence times are entered into the “Failure Mode’ column; the mode type is entered into the “When Correcting” column (“Not Correcting” = A-mode, “In Test” = BC-mode, “After Test” = BD-mode); and the fix effectiveness is entered (in percent) for BD modes in the “Fix Effectivity” column. 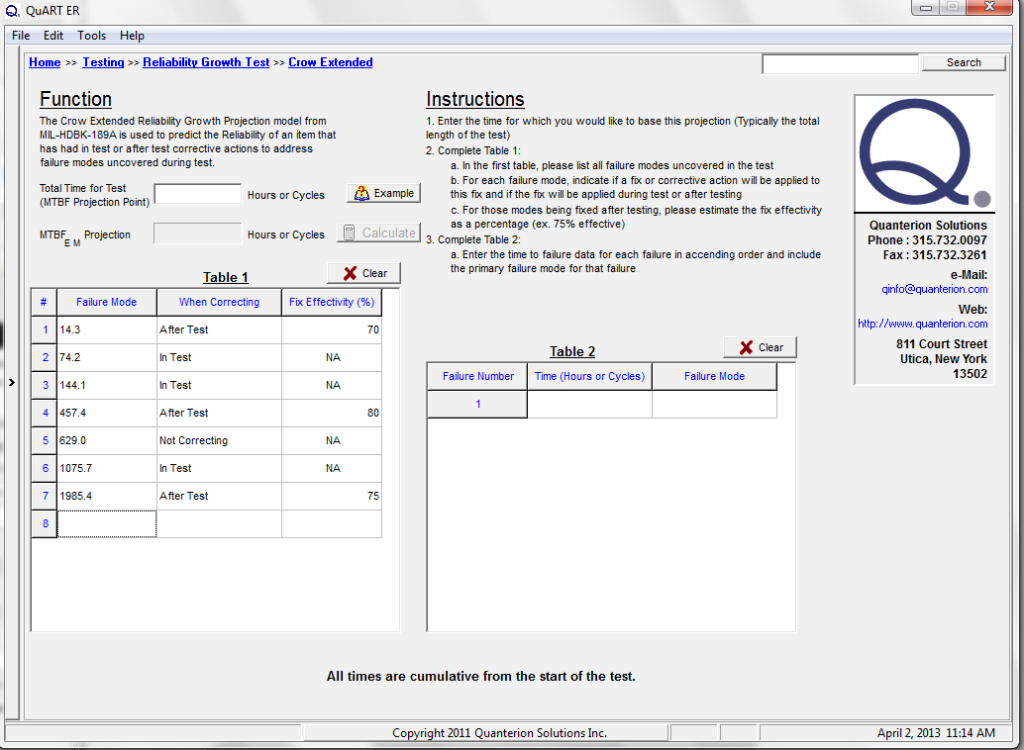 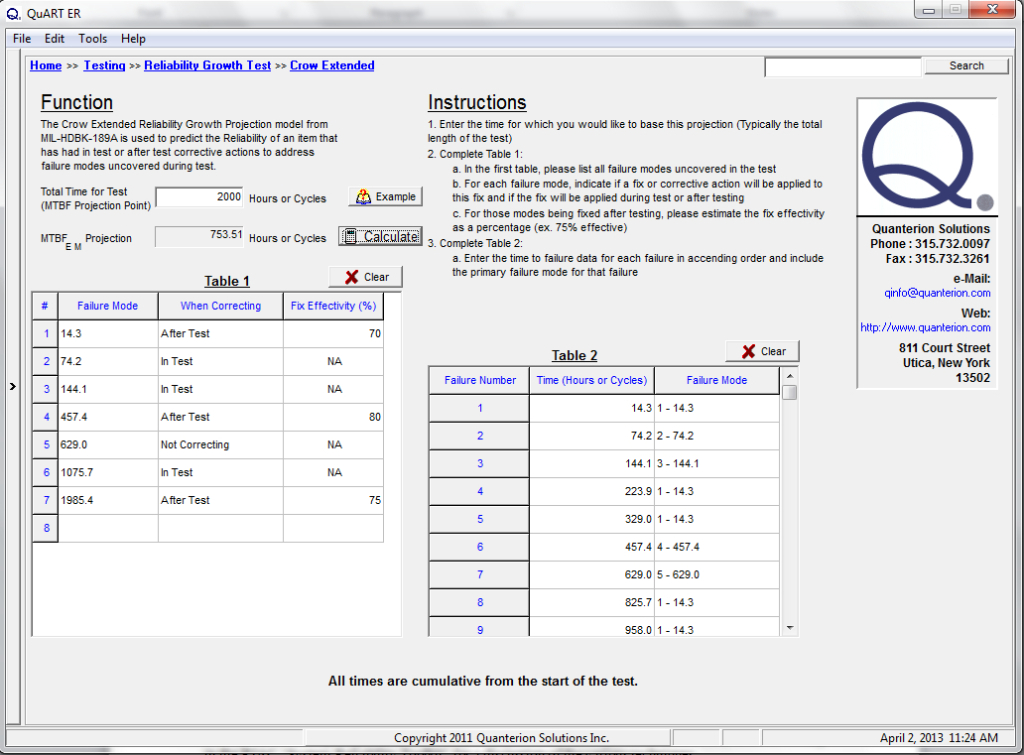 As shown in Figure 4, the projected MTBF at 2000 hours is 753.51 hours. Using this calculator, projected MTBFs at various test times can easily be determined. Additionally, if projections show that the desired MTBF goal is not likely to be achieved, changes in management strategy (e.g., a decision to correct an A-mode) can be modeled by changing the mode type and including a fix effectiveness.

A brief overview of the Duane, AMSAA-Crow, and Crow-Extended methods of modeling reliability growth have been provided here, along with sample calculations using Quanterion’s QuART-ER calculator. A detailed discussion of reliability growth design and test methods, including these models, is presented in the RIAC’s “Achieving System Reliability Growth Through Robust Design and Test” publication and training program developed and offered by Quanterion. Additional information is also available on this topic through one of Quanterion’s RELease series of books titled “Reliability Growth“.